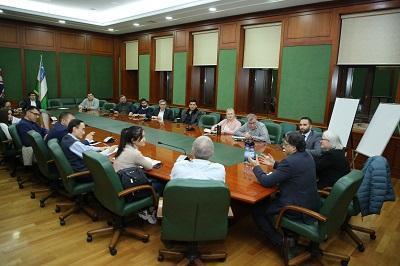 Westminster International University in Tashkent (WIUT) was proud to host two high-level international roundtable discussions on economy and development in Uzbekistan, with senior participants from the Belarusian State University and the UK Department for International Development (DfID). The roundtables took place on 3 December 2019.

The first roundtable, the Economy of Belarus: Prospects, Priorities and Challenges, was attended by Dr Catherine Gospodarik, professor of X at the Belarusian State University. Alongside both students and faculty members, Dr Gospodarik discussed global economic trends with a specific focus on the Eurasian region, economic growth and outlook in Belarus and Uzbekistan, and current and future collaborative projects between the two. Dr Gospodarik also noted the fast-growing economy of Uzbekistan and highlighted the new economic opportunities awaiting the country and its existing and prospective trading partners. Herself an economist with a strong background in mathematics & econometrics, Dr Gospodarik advised students to pursue maths and econometrics as these were foundational skills for qualified analysts and economists.

Read 4910 times Last modified on Friday, 06 December 2019 19:53
Tweet
Published in WIUT News
More in this category: « Graduation Ceremony Photos Day of adoption of the Constitution »
back to top