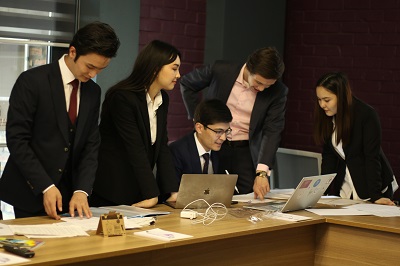 WIUT’s Commercial Law students are Uzbekistan’s champions of the “Jessup Competition” held in February 2022. Jessup is the world's largest moot court competition. Teams from Law Schools around the world compete in a simulation of a fictional dispute between countries before the United Nations’ International Court of Justice.

WIUT’s team is now preparing to participate in the international finals in late March. Our students will compete against 200 law school teams from around the world which were national champions in their respective countries.
Congratulations to our students:

and to their coaches:

Published in WIUT News
More in this category: « Development Policy Virtual Seminars Our student receives State Scholarship »
back to top