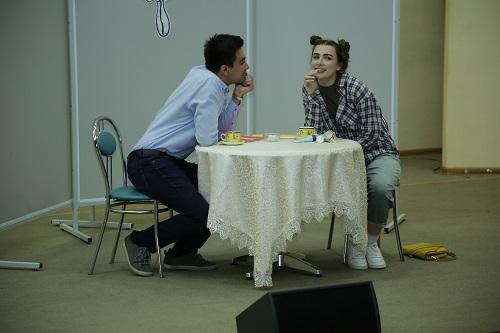 On 28 and 30 April WIUT’s renowned Drama Club staged Atika Desai’s “Cupid’s Nightmare”. The comedy follows its two protagonists, Guy and Girl, as they go on a series of dates with all sorts of characters.

Last year, due to the unexpected national lockdown, the Drama Club was forced to forego its 13th season of performances. After the announcement of the return to face-to-face teaching, and with only a relatively short time available for rehearsals, the Drama Club made the decision to put on a short play. The first rehearsal was held on the 11th of February.

The play involved a total of 16 students of all levels, including Foundation year students. For the first time in 14 years, the indefatigable play Director and Manager of the Drama Club Rozaliya Ziryanova performed the part of the “Housemaid” in the play.

The play was very well received by the audience to rapturous applause.

As is always the case, staging the play was a great experience for all the cast and crew members, particularly this year in light of the very tight timeframe available before the final production.