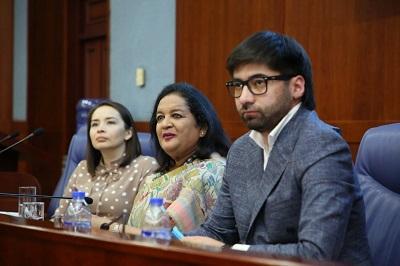 Ashita Mittal, UNODC Regional Representative for Central Asia visited WIUT and gave a guest lecture on topic “UNODC and its role in crime prevention and the rule of law”.

In the event led by Ms Mittal in the format of an interactive open dialogue with students, UNODC’s mission and activity at global, regional and country scale, the specific projects implemented in Uzbekistan and their impact on the creation of the culture of lawfulness were discussed.
The event was organized on the initiative of the WIUT Students’ Union demonstrating students’ strong interest in the activity of the organization and the experience of the honoured guest.


In the opening greetings, WIUT senior administration representative, Student Support Services Director Gulnaz Bektemirova stressed WIUT’s strong focus on personal and professional development of students through projects and events such as those organized in partnership with UNODC Regional Office for Central Asia. At the end of the event, partnership recognition award plaque was presented to the Ms. Ashita Mittal as a token of appreciation of cooperation in this direction.

Published in WIUT News
More in this category: « Global Moot Competitions Information session for parents »
back to top