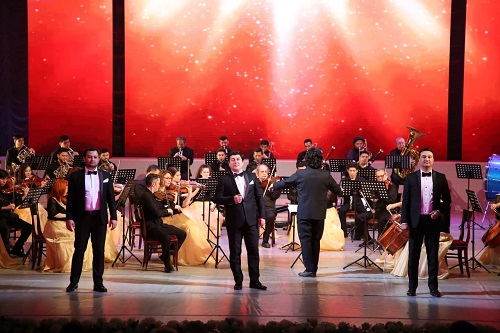 On Friday, March 4th, our University celebrated its 20-year anniversary in the Alisher Navoi Bolshoi Theatre. More than 500 people enjoyed a unique classical music programme especially orchestrated and performed by the singers and musicians of the Theatre. The audience had the opportunity to find out more about the key milestones of the International University in Uzbekistan being the first of its kind in Central Asia to offer International British Higher Education degrees.

Bakhrom Mirkasimov, Rector of WIUT, opened the event highlighting - “This is a significant milestone in the University’s history and a major mark in the internationalisation of higher education in the global arena. This year, WIUT turns 20 years old and we are proud to continue producing new knowledge and highly qualified graduates contributing to the development of new Uzbekistan and beyond.”

In January 2002, WIUT opened its doors to the first 120 students. Since then, the University has enjoyed tremendous growth and in September 2021, more than 5,000 students enrolled for the academic year. In 2003, WIUT established the first Students’ Union in Uzbekistan.

In 2004, the first set of WIUT undergraduate degrees were validated by the University of Westminster in the UK. The first student’s cohort graduated in 2005 with an international degree, confident that they could make an impact where it truly mattered. The increasing demand for quality higher education in the country led to the validation of the first postgraduate courses by the University of Westminster (London, UK) in 2006. Today, WIUT offers five undergraduate and eight postgraduate courses. A doctorate programme is also in place.

In 2009, WIUT decided to widen the spectre of its educational services and established an Academic Lyceum (ALWIUT). According to the Ministry of Public Education's monitoring, ALWIUT is one of the most prestigious lyceums in the country in terms of its matriculation rate of 99%.

In 2015, WIUT launched its Alumni Association with more than 1,000 Alumni. Today, there are almost 5,000 Alumni. Having made outstanding achievements in their careers, WIUT graduates were eager to share their experiences with current students and support them in any way they could.

In 2018, WIUT introduced the Student Support Services which enables students get all the necessary support academically, professionally and to socially develop and flourish during their studies. Since 2018, WIUT has established the Centre for Policy Research and Outreach, the Centre for Professional and Lifelong Education and the innoWIUT Entrepreneur’s Lab. These units support the development of students, staff and external organisations.

WIUT students have access not only to high class education but also to a number of high quality services such as the Learning Resource Centre with more than 42,000 books, two dormitories for students who come from the regions, a well equipped Sports centre and canteens/ coffee shops.