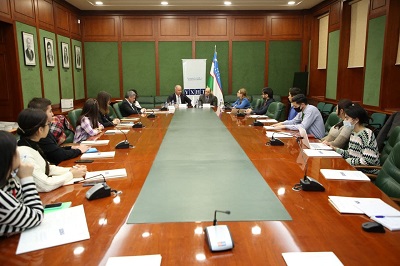 Westminster International University in Tashkent (WIUT) hosted a delegation of the Organization for Security and Co-operation in Europe (OSCE), headed by the Head of Mission of the OSCE, Project Co-ordinator in Uzbekistan, Ambassador, Dr.  Pierre von Arx, who presented to our students the organisation’s new research and employment opportunities.

Ambassador Dr. Pierre von Arx highlighted OSCE’s mission and goals as well as the development of the organisation’s regional programme. He shared with WIUT students his life experience from previous positions in the OSCE and advised them that “hard work and self-discipline are the keys to success”.

The Rector, Bakhrom Mirkasimov noted that there is an ongoing collaboration between the OSCE and WIUT related to joint professional managerial training courses for women, aiming to support female entrepreneurship and empowerment in the country. The courses are organised at WIUT since 2017. More work on start-ups and summer school collaboration activities are being considered for 2022.

OSCE’s representatives presented also the research titled “States, borders, and waters: on the patterns of isolation and interdependence in Central Asia” that covers a wide range of security-related questions, starting from theoretical foundations of the state and security, followed by case studies with a focus on borders as social relations.

The OSCE delegation also shared with WIUT students the “Employment opportunities at the OSCE”, including internships and research assistant opportunities.

Published in WIUT News
More in this category: « "Credit based" system goes national Cooperation with IT companies »
back to top