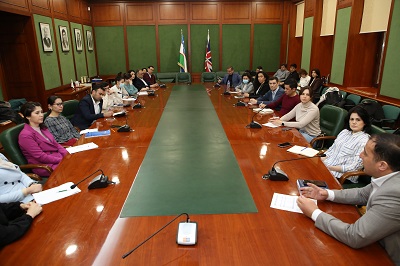 In line with educational reforms in Uzbekistan, the interest in attaining doctoral degrees has been increasing among the academic and management staff of Westminster International University in Tashkent (WIUT). Since the establishment of our Graduate School in 2020, four full-time and 13 part-time students have enrolled in “Management” and “Statistics & Econometrics” disciplines.

On March 16th, the Rector of WIUT, Bakhrom Mirkasimov, met in person with more than 25 doctoral students. During the meeting, each Ph.D. candidate shortly described her/his research, shared the progress, challenges and obstacles. Comments, suggestions and recommendations on how to further develop the graduate education were discussed while  future research plans were also identified.